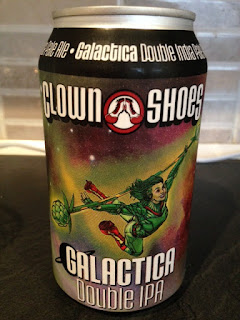 As it says on Clown Shoes Beer website, the brewery's motto is to produce beer without pretension while being free and a little crazy. I think we can all agree that's an decent philosophy which also goes some way to explaining the totally bonkers themes of their beers. I pulled this one out of my fridge and up, up and away I went with the courageous hop staff-wielding woman on the front of the can on her quest to promote good beer...

The style of this particular brew is a first to feature here: the Double IPA, or DIPA. This is a style big on hops and big on booze, which left me big on hope of what was to come.

Galactica Double IPA pours a hazy dark amber with a healthy surge of off-white head, making for a very inviting glass of beer.

As you'd expect from a beer dry-hopped with three different hop varieties (one of which being the very apt Australian GALAXY hop), you're greeted on the nose with a big hoppy whiff of tropical peach and mango, a trail of a spirity note from the 8% ABV following closely behind. 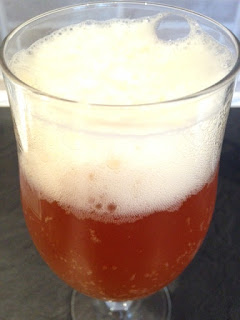 Like a space shuttle navigating through a meteor shower, my mouth was bombarded with everything at once (except in my case, of course, that was a good thing): A rich malty base is complimented by juicy pine notes and contrasted with a huge dose of citrus hops, which leave a strong, bitter aftertaste. It's thick and juicy with a semi-dry finish, and a lingering, alcoholic warmth. 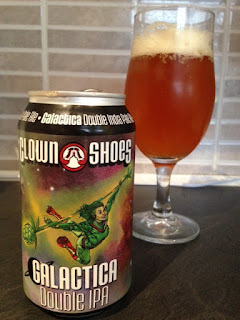 Galactica's punchy flavours mean nothing is lost when it's cold but there's plenty of complexity to delve into when it's not. What had started off as a tasty, refreshing brew when it emerged cool from my fridge, ended up a rich, warming beverage when it finally reached room temperature, and both brought me enjoyment of cosmic proportions.

Where to buy
£3.80 from Left Field Beer
Posted by BeerThereDrunkThat at 20:09 No comments: 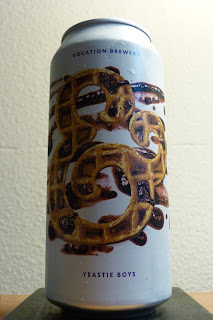 In a world where it's normally frowned upon to reach for a beer before midday (except at airports, you might have noticed) the so-called "breakfast stout", which also ironically never tends to be particularly low in alcohol, has to be one of the naughtier styles out there. Feeling naughty, I grabbed a can of this Pommie-Kiwi collab brew and decided to dive in. 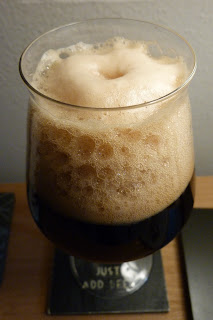 The first thing I noticed before anything else wasn't the design on the can, but the size of it. At 440ml it bucks the trend of small-batch indulgences being presented in smaller measures, which is just as well, because if it's going to replace my morning coffee then there needs to be enough to fill a mug. As for the picture on the front of the can that shows a golden, jam-bedrizzled waffle, it certainly raised my expectations but not nearly as much as the amount of saliva in my mouth.


The smooth, jet-black liquid that gushed into my glass produced, quite possibly, the most perfect head I've ever seen: soft, fluffy and compact, it could almost be a marshmallow bobbing about on top.

With such promising appearances come the hopes of an aroma to match, and I'm pleased to say that it delivered on the goodies. Rich, indulgent doughy aromas topped with hints of sweet but slightly tangy berries sprinkled with spicy cinnamon wafted up from the glass, and at this point if the flavour was anything but totally luscious it would have led to complete devastation. 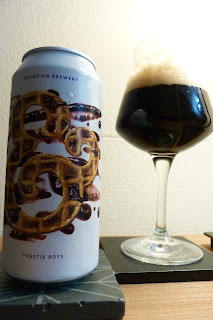 Why do I only have one can of this? is the first thing that sprang to mind after taking a lengthy swig. WOW. A punchy, fruity drizzle of blueberries and blackberries cut through the grainy, dark roasted malts as they mingled and melted together on the tongue, peppered with a spicy, aromatic hint of cinnamon. In a stroke of sheer genius, this beer manages to be extremely quaffable while being rich and decadent. And best of all, unlike many other beers of the sort, there's nothing remotely synthetic or fake-tasting about it. Nope, just delicious.

So much was going on as I made my way down the glass that I was oblivious to the 6.9% alcohol content that's noticeable only in the form of a gentle warmth, just like that of your breakfast waffle.

I've never been much of a breakfast person, but if this is what I've been missing then sign me up to the club.

Where to buy
£3.00 from Tesco
Posted by BeerThereDrunkThat at 23:52 No comments: